How do you mend a broken heartstone?

Amber crashed onto an alien planet and survived the dangers of an unknown world. Three literally hot aliens with lava coursing through their veins decide she’s their mate. She’s endured everything Sonhadra has thrown at her but she might not survive their fiery embrace.

Pel and Mishal know that the commanding human female is their mate. They vow to claim her once they repair Flin’s fractured heartstone, the material from which can only be found in the frozen north. Barely able to keep their hands off each other, how can Amber and her Fire Valos resist temptation until they can find a way to safely be together?

Inferno is a return to the multi-author, multi-book Valos of Sonhadra series and full of steamy Reverse Harem action. 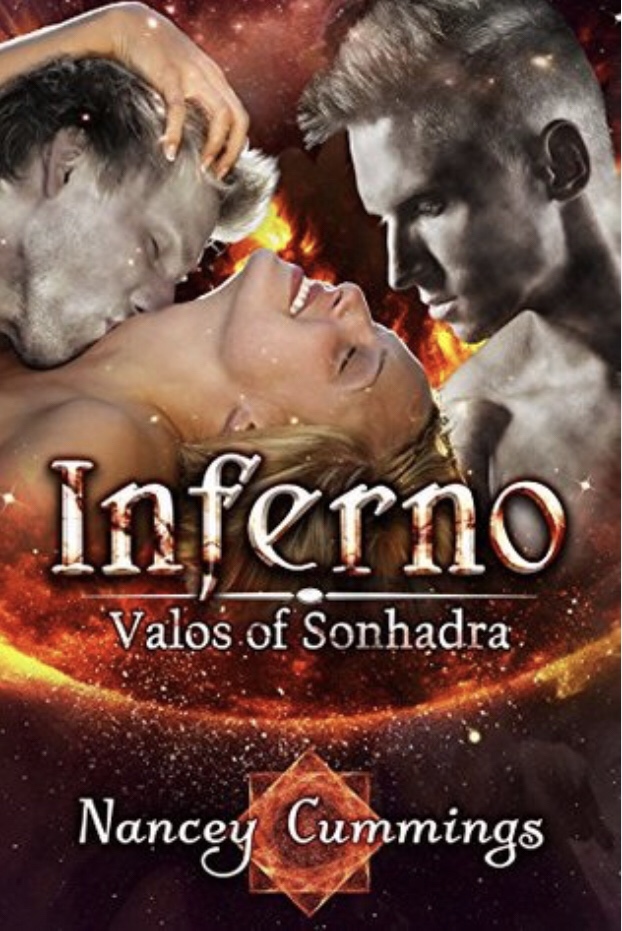 Shame on me! I read this when released and failed to do my blog post ( head is hung )

Book 11 is the epic Valos of Sonhadra series.

After Surviving the concords crash and making their way to an abandoned village and eventually to the fire city and home of the fire valos. It’s time to make Sonhadra their true home, as the ‘unofficial leader’ of the human survivors Amber finds herself making decisions for all her group… but what she really wants is love.. she sees the relationships blooming around her and after so much time as a prisoner and on Sonhadra…craves that for herself… especially when she meets Pel and Mishal…after returning with their ‘sleeping’ brother flin… she finds her self wanting them more and more.

But the tribe brother won’t and can’t make Amber their mate until they fix clubs heart stone… despite craving her. And solving the problem of the fire city’s rising lava lake.

Ananother fantastic instalment by Nancy Cummings… and the title is appt because the chemistry between Amber and her Valos is HAWT. I adored seeing the relationship develop between Amber and mishal… and Amber and Pel… it was brilliant and especially with Pel and his teasing nature.

The thing with this series..especially so with the second round books… is that you get to see and catch up with the previous characters continuing stories which I just adore. As well as finding out about ( what we’re side characters ) stories like Amber ( and Kira in iced book 10 ) and seeing the world of Sonhadra develop into more!

I say keep them coming because I am addicted to this series.