The sequel to Into the Dead Fall, which was released as part of a two-book set with The Scorpion’s Mate.

A fated mate she doesn’t want.

An enigmatic alien she shouldn’t want.

Finding your way in the Dead Fall isn’t easy, but it’s nothing compared to figuring out what your heart truly desires.

Evie managed to survive for months in the strange parallel dimension where she was dropped after accidentally activating a portal in her father’s shed. The Dead Fall doesn’t treat survivors kindly, as Evie discovers when she’s captured by alien creatures and taken to the settlement of Omni to be put on display in a bar.

When a gray alien appears in the bar to rescue her, she wonders at first if she hasn’t gone straight from the frying pan into the fire. Yet, the alien she nicknames Gray proves to be friendly, if a bit too determined to see her meet some destined mate she’s not interested in finding.

Gray tells her she must seek her own destiny, but she can’t help thinking she’s already found it, despite what he says. After all, her knight in shining armor has come to rescue her, and if he just so happens to have a flying saucer instead of a white horse, that’s okay with her.

Doshakeren is a hero. A legend. They sing epic songs about the warrior among his kin. When his most trusted advisor betrays him and locks him away with a strange artifact that casts him into another realm, he faces challenges beyond anything he’d ever faced before—the biggest being his fascination with the human female who makes him have forbidden thoughts that would see him outcast from his nest.

Evie must choose her own destiny, but nothing will be easy for her, least of all the Dead Fall itself, because the Nexus is watching. And waiting. 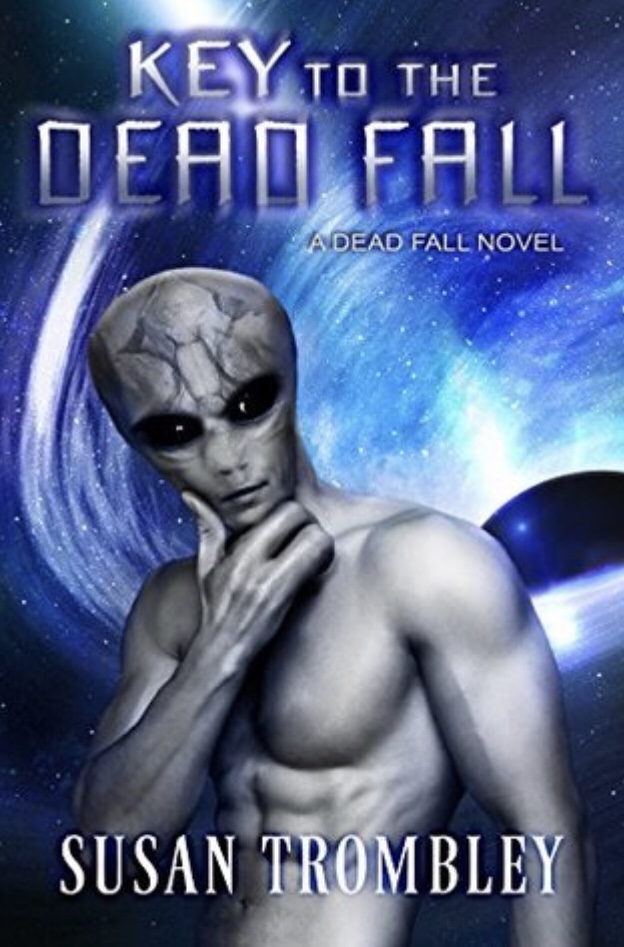 NOT just because it’s a great book but in that it lays the foundation to this book and sets up Grey and Evie’s Meeting.

The Looge 👽👽👽… the most powerful being and self designated leader of Omni breaks his own rules.. he interfears with the timelines he has been observing for hundreds of years, he steps in and rescues Evie from a terrible fate…despite knowing that she would be saved by her key mate further down the line. The repercussions could be detrimental to everyone who has fallen through the dead fall but for some reason..The looge cannot do nothing leaving her to a terrible fate.

After inadvertently stranding herself and her sister in Omni and instantly seperated..

Evie has been lucky to avoid the weird and dangerous inhabitants that make living there a daily dose of life roulette. Having a prepper/ Uber conspiracy nut for a father has instilled skills into Evie that have helped her to survive.

After her luck runs out, Finding herself rescued by a ‘grey’ is the straw that breaks the camels back…all she has heard and been taught about grey aliens is at the forefront of her mind, however she finds herself beginning to like her rescuer, with his strange ship, wonderful and deadly telekinetic powers and a friendship begins to develop.

The Looge was a brilliant charachter and I found his transformation both mental and physical a ingenious piece of story crafting. Both wonderful and intriguing and totally original. The theme of biology taking away all personal choice and will impacting on both Grey and Evie.

I loved that Evie was able to crack his defences and make him feel despite all his technology. His serious nerdy nature and Evie’s fearlessness and sass led to some great and wonderful interactions.

The introduction of the key mates theory ( and the introduction of Doshak ) and the mild cross overs into the authors Iridian Test Subject Series was also brilliantly done. Despite some reservation around biological choices verses heart chosen choices.

So if you hadn’t realised by now… I am a Sci fi romance nut, And I’ve read ALOT of Sci fi romance…the good, the bad and the downright rubbish. If you want to read a series that features more than just crayon coloured humanoids in space ( not that there is anything wrong with those ) but are left wanting for a bit more alien and a whole lotta story for your buck ( LIKE I DO ) then you should read this series.

I loved the first book, and I was estatic when the second book came out. It just delivered so much to my Sci fi loving brain…I adored this book…catching up with Characters from the first book was a welcome addition.