Book 3 in The Kraken Series.

reviews to book one and two in this series can be found below..

After the events in book 2, The Rangers have moved in to the fishing town of The Watch.

On high alert and gunning for the blood of his missing and presumed dead son, Commander Nicholas Laster will not rest until he has all the monstrous Kraken killed for harming his son.

Along with him is his second in command, his daughter Elle Larkin, her hate for the Kraken is as deep for her longing for her older brother…She believes Randall cannot be dead.
She is not the Son her father so desperately misses, forever compared to him, nothing she does is enough…. but she will do everything in her power to get answers and get Randall back.

Even if the repercussions of her perfect aim results in events that rest uneasy within herself.

Dracchus has been the ever protective solid unofficial leader of the Kraken since book one.
After the consequences of book 2 he tasks himself with the mission in scoping out the rangers, the danger is real on both sides..human and Kraken with clear divides in both camps, strong lines have been drawn in the sand..and to protect his adopted family of Kraken ‘Brothers’, their human mates and their children he will do all he can to ensure their safety as well as those Kraken who fear and resent the human living with them in the Facility ( underwater base/home of the Kraken )

So finding himself and two others captured during their reconnaissance mission and at the less than tender mercy of the Commander of the rangers is not ideal, but neither is setting his sights on the Commanders Daughter.

With two headstrong and determined main characters such as Larkin and Dracchus featuring it was bound to be a clash of wills. Both stubborn in their individual resolve, Larking to get answers regarding her brother and ‘steer clear’ emotionally of Dracchuss no matter how enticing and intriguing he was to her and for Dracchus to get it through his mates head that no matter the outcome she would choose him!

I knew that Dracchus was a great character from the very first time we met him in book 1 and that his book with be a gripping read. Seeing the big gruff marshmellow realise and recognise his own inner wants and feelings would be a sight to enjoy and behold. ..and by god this book did not hold back on all those fantatic moments, watching his resolve against the humans disintegrate over the past two book was brilliant but this book was absolutely fantastic. The fact that he finally realised he wanted a mate of his own, not just any mate but a fierce and equally as stubborn but supportive human mate and that nothing would stop him from getting her…not even her own past fears, doubts or pains..

I loved how strong Larkin was, despite her inner turmoil..that she was broken or not good enough…she recognised that Dracchus was hers and that she would stand with him for all time. That the strongest of people are the most hard on themselves and need support too, that she recognised that part of herself in him.

This is a fast paced and explosive follow up to the two previous books in the series…the action starts straight away and does not let up. It was fast, furious and oh so gripping, without scrimping on the beautiful world building that went in to Halora and the emotion that you can expect and adore from a book by this awesome writer duo. Echoing the theme in the other books in series of tolerance and understanding for all. Recognising and appreciating the differences in each other no big or small.
I’m more than happy to see that the story will continue…because I’m not ready to leave The Kraken behind yet. 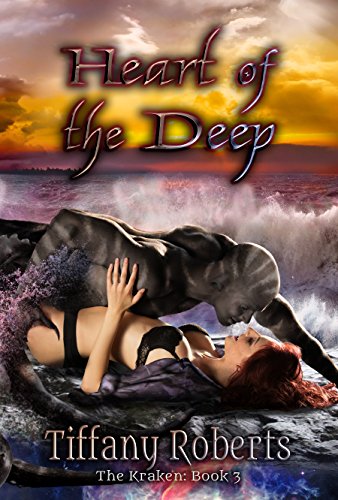