Beware the are unavoidable spoilers ahead
This is a story that focuses on Valena, who we met in the first book in this series. She is also a slave, born and raised to breed more gifted slaves to be sold off on the whim of their masters…however Valena is  gifted with the ability to control of others minds. She is a valuable slave, one that can control the other slaves to do the bidding of the masters… as blood slaves…ensuring they are compliant and produce the most oxytocin ( the chemical that the taint plague infested planet inhabitants must consume to prevent its spreading and the eventual premature death of the infected for a price.
In a bid to keep her under control her ‘owner’ damaged her eyes so she could not use her powers against him with her gaze, but still able to capitalise on her gift with her ability to use her power through touch.
This book continues 5 months or so after the first book.
Amalia, General khel and his cousin lhor are focused on finding  the remaining active blood dens and rescuing the blood slaves.
The Master is focused on not loosing his most important slave, and decides to move her out of the dens,  only returning her when needed. Valena is hopeful that this sudden move will finally give the opportunity to escape.. praying for a miracle to occur and some how find her way free.
What The Master doesn’t plan on is Councillor lee zhul.
When zhul finds an alien woman hidden in his lands he knows that he is treading dangerous ground. The fallout from Valena being found on his families land or being tied to the blood dens in any way shape or form could be fatally damaging to him and his family. But he is compelled to help the woman..even if it means seemingly appearing to play along with the Masters plans.

Utterly utterly engrossing from the start. Action packed, heavy with plot, laughter and full on feels. This is a totally original story, filled with beautifully crafted world building.

I will be honest, The flashes of Zhul we see in book 1 did not make him a favourite of mine ( I was too busy focusing on Khel and Ghan ) but this book shines the spotlight on Zhul,  revealing  him to be so much more than the arrogant Councillor we thought we knew.
I’m really enjoying how the series is evolving and progressing. I  literally cannot wait for more and this series is quickly becoming one of my all time sci fi favourites!!
Blind Fate on amazon UK
Blind Fate on amazon US
Currently the whole Veredian Chronicles series is on offer for 99 pennies until April 19th!!! 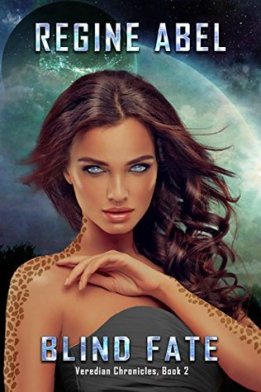 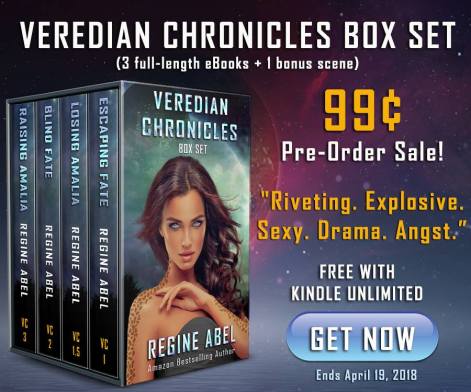